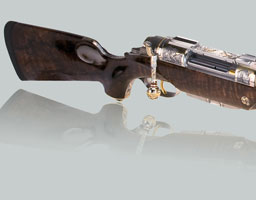 When searching for the very best high end product and spectacular engraving art – indeed for something truly exciting and unique – then this might be your piece. The DBR cal. .470 Capstick “Mokume” was voted Weapon of 2010.

Mokume-Gane is a centuries-old forging technique that originated in Japan. Their traditional method is to combine various types and colors of metals and then manipulate them to create patterns resembling forged pieces. Samurai used Mokume-Gane material to ornament the handles of their swords. This technique was used on the DBR cal. .470 to cover all the metal parts with innumerable filigree miniature works of art, making it virtually impossible to take in all the images at first sight.

One could spend hours studying these uncannily realistic animal motifs, identifying fresh details and soaking up impressions. Of particular fascination is the specially crafted bolt lever entwined by a gold snake. The crown jewel of this DBR is the ruby, mounted in the head of the bolt handle, inserted using a proprietary process.

Fuchs Fine Guns used an unusually beautiful root burl wood from the Caucasus for the stock of this exclusive one-off. The harmony of the overall impression that the decorated stock lends this individual piece deserves special attention. The interplay between the perfectly formed creation of the master engraver and the harmonious stock by Fuchs makes for a true masterpiece. This unique marriage of form and function captivates hunters and art lovers alike. 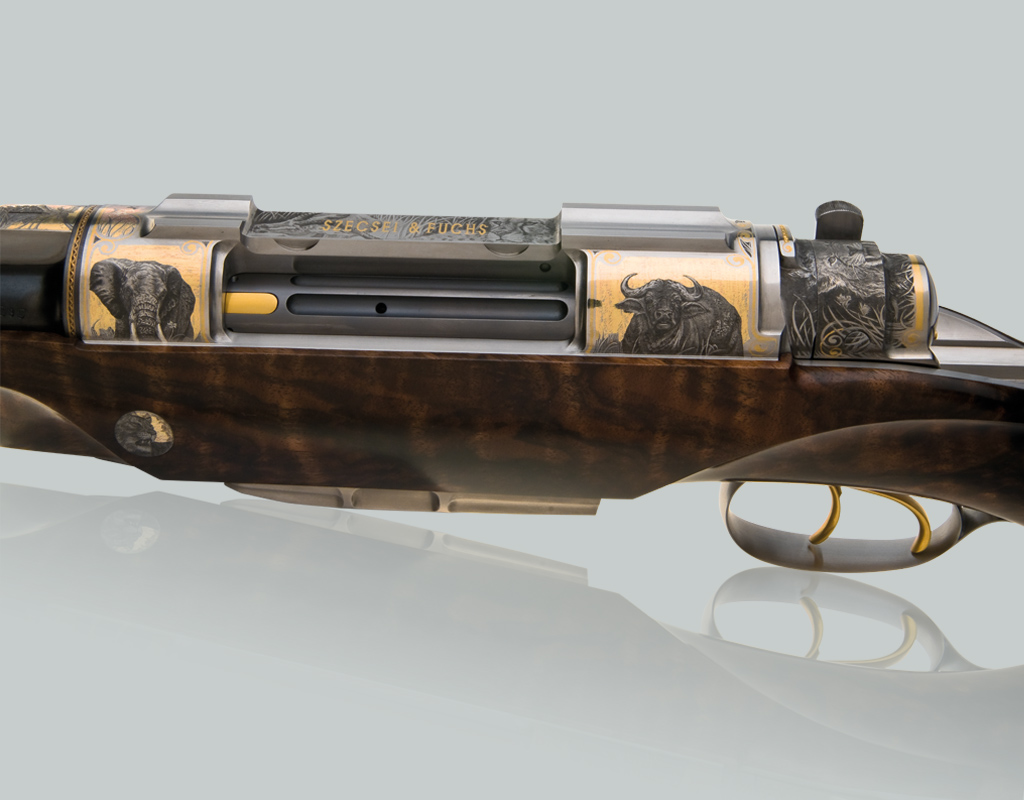 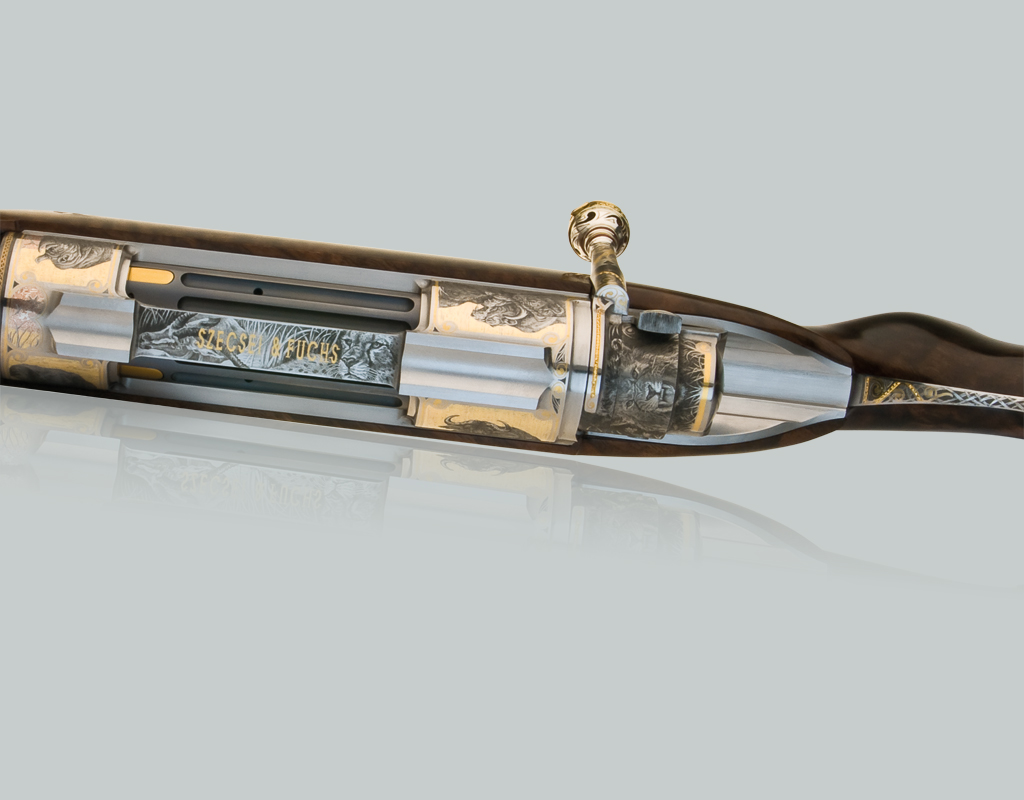 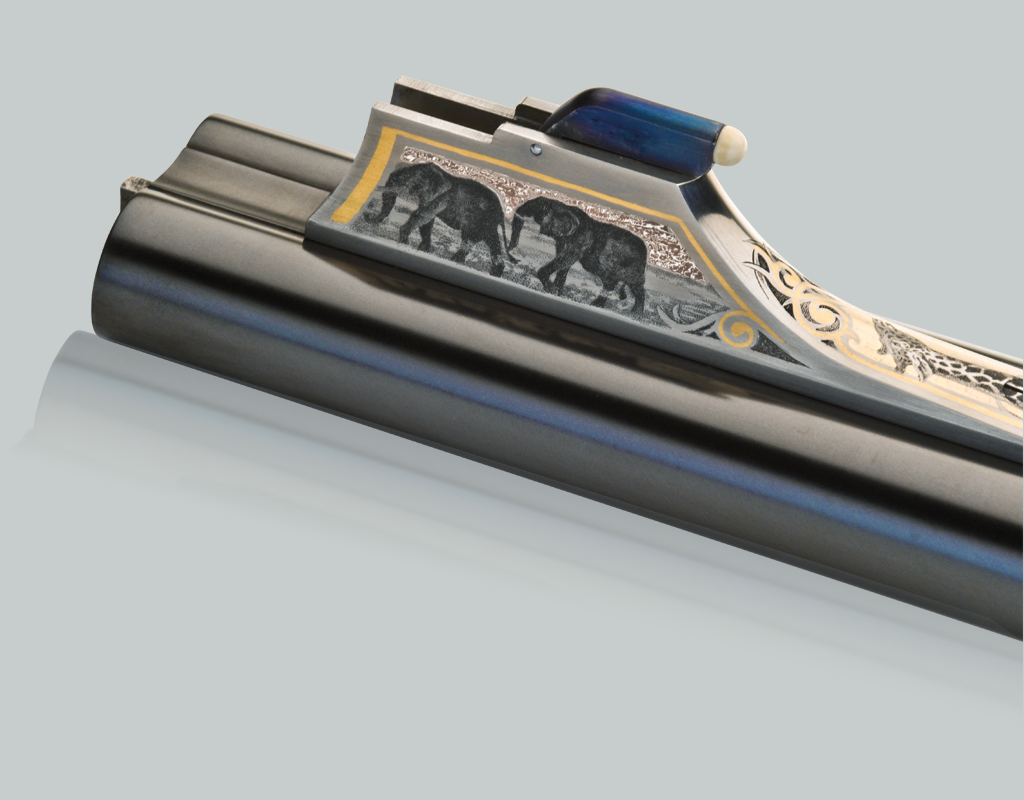 All its metal parts are manufactured from the highest grade steel and titanium¸ and are perfectly matched to ensure longevity and reliability. Refining, special coating and repeated polishing give all the surfaces a micro-finish, ensuring life-long resistance and protection against corrosion.

Under the African sun

The almost photographic animal images on the surfaces of the receiver are set in 24-carat gold Mokume, creating an illusion of the sun rising over the African landscape.

All the metal parts are manufactured from the most exclusive types of steel and titanium. Refining, a special coating and repeated polishing give all the surfaces a special smoothness, resistance and corrosion protection for hundreds of years.

Superhuman precision and the patience of a saint

On the base of the magazine, the engraver creates an unparalleled image of a leopard. The master craftsman uses another Japanese forging technique called Itame-Gane to produce such a remarkably lifelike representation of the wildcat on his metallic canvas. The detail in the leopard’s hide is astounding. The entire motif is set in a manner that creates an exceptionally lifelike representation.

The epitome of decorative metalwork

The pistol grips are decorated with sculptures such as this elephant, which is carved out of a solid block of gold. The background is inlaid in ceramic and applied to the gold. With this unusual ornamentation, the artist emphasizes the rifle’s exclusivity, in that it is both a piece of precision sporting equipment and an artistic masterpiece.

The roaring lion looks directly into the eyes of the observer, whichever way you look at it. The artistic engraver overcomes the difficulty of producing a two-dimensional portrayal of the animal on multi-contoured surfaces using the Bulino technique. The engraving of the lion’s mouth is particularly remarkable at the point at which the curve of the breech plug cap is drawn in two directions. 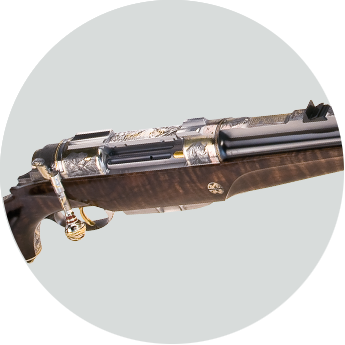 The animal world of Africa

Captivating detail also decorates the front sight base. The head of a giraffe, set with gold, is embellished by elephants, antelopes and gnus to the left and right. The African animal world is set against an Itame-Gane background.

A rifle tells a story

Our Mokume specialists work the metals in such a superb manner that, after forging and rolling, the desired leopard skin texture is created. Our master engraver ranks among the best in the world. On this rifle he depicts a story of African game.